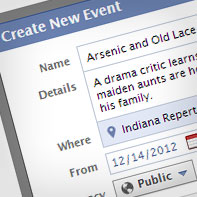 It’s always dangerous to lean too heavily on any third party when you are building an audience for your brand. It doesn’t matter if that brand is a theatre venue, a production company, or your personal brand: the risk is there.

This came to head earlier this year when Facebook started limiting the number of people who see the posts of brand pages. In order to encourage brands to pay to promote posts, the default behavior has changed so that only 10% of a page’s followers see the “free” posts. Facebook can change these rules at any time, in fact they may have changed again by the time you’re reading this.

In spite of the risk we keep going back to Facebook for theatre promotion. At least I do. Why is it worth the risk?

A huge percent of the world’s population uses Facebook. In almost any English-speaking part of the world (presumably you live in those areas if you are reading this) a big chunk of your potential audience is on Facebook on a daily basis. If you want to let them know about your show, you have to go where they are.

It isn’t just your prospective ticket buyers either. Your advocates have spent years building their personal networks on Facebook. So when you add promotions on this social network, it’s very easy for your cast, crew, and marketing team to share any marketing collateral with their individual networks as well.

That brings us to the incredibly powerful Facebook events. Facebook allows you as an individual – or better still as a production company – to create an event on Facebook. You can include a date and time and invite people through Facebook to attend. While you can and should have a website you control as the home base for your online activity to promote your show, it isn’t an excellent practice to create a Facebook event to act as grand central for your Facebook activity. Events are far from perfect, but they have a killer trait that makes them ideal for promoting live events.

Let’s explore what that last idea means. When you create an event for your show, your cast and advocates are going to invite everyone that lives in your area to attend the show. (Facebook provides a geographic filter that makes it easy for them to just invite the people in your market.) A few people will immediately indicate “yes” they are definitely attending. A smaller number will indicate “no” usually with regrets about not being able to attend.

The vast majority of people won’t respond at all. Why? Usually because they just don’t know yet what their plans are that far ahead. But the way Facebook is structured they can see all the updates you are putting on Facebook about the show. These people are on the fence about whether or not to buy a ticket, and you have an avenue via this event page to keep sharing with them tidbits about how great your show is and why they are going to love it.

Next Story: Are Season Subscriptions Going Extinct?
Previous Story: No budget is no excuse when you’re promoting theatre