Going Back To the Show That Started Sold Out Run 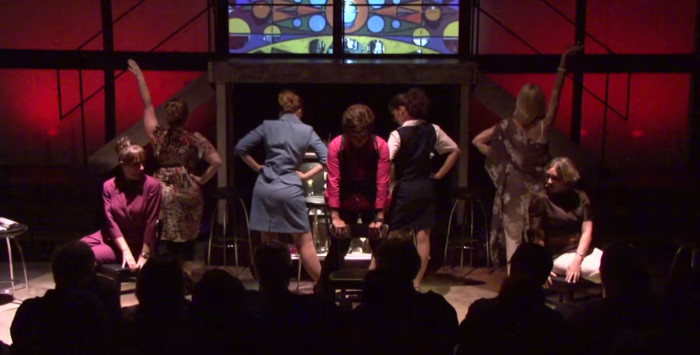 In a few short months, I will be having a very surreal case of deja vu. In fact it’s already started. Last night I sat around a piano at my friend Lynn’s house with a few of the cast members from the upcoming Indianapolis premiere of Enter Love.

This is the same show I did back in 2010 after not having set foot on stage in about a dozen years. I ended up involved in both performing and marketing that show, and… it looks like I’m going to be wearing those two hats again in 2015. Once again I get to attack both the material and the promotion.

I want to table the significance for me as a performer for a moment to talk about the marketing. I don’t know what kind of attendance I was expecting when I signed on to promote Enter Love back in 2010, but it wasn’t a sold out (extended) run. And in spite of having another half decade of experience under my belt, I admit I’m not sure I know any better what to expect this time around.

In spite of doing the same show with the same director, this production is a very different beast to market. Here’s why.

Almost everything about the first production was smaller. In Lafayette there is a much smaller audience for live theatre. There’s very little competition. The theatre there isn’t tiny, but it seems that way compared to the 120-seat theatre waiting for us in September.

In Lafayette I think we could have done very well working to fill 120 seats, but Indianapolis has a lot more live theatre going on. I regularly miss high quality shows here that I want to see just because there isn’t enough time to get to them all. There are certainly more people here who come out to see theatre (which is exciting), but less of those people are a “built-in” audience that will come to the show regardless of how good the marketing is (which is a mixture of exciting and intimidating).

Speaking of “built-in” audiences, the show in Lafayette had a bigger footprint in that community. There was a large cast made up of performers who were very talented, but didn’t get up on stage as their main gig. Since this wasn’t something they do every few months, more of their friends and families came out for a rare chance to see them under the lights.

At the time I hadn’t performed in a dozen years, and my coworkers drove 90 minutes to come see me. Today I do a lot more work, and my friends have many chances to see me throughout the year. Year after year. And the whole cast of our new production is made up of professionals who work. A lot. We can count on a significant other or a couple close friends of each cast member to show up, but no one’s office pool or entire book club is coming to the show.

It’s hard to overstate how much photography and graphics can help or hinder your marketing efforts. We lucked into having a great logo for the show in Lafayette because the music director’s partner just happened to have some talent there, but we didn’t really have much imagery beyond that.

This time around our venue has an existing agreement with local digital media savant (and former Sold Out Run podcast guest) Zach Rosing. The concept for the poster is great, and I’m definitely excited to see how Zach pulls the different pieces together in the next few weeks. Plus the production stills he’ll take for us right before the show opens are always very high quality.

Proximity to an airport

The story of Enter Love takes place entirely in an airport. Lafayette was too far away for us to have many opportunities, but I’ve been talking to someone at the Indianapolis International Airport about what kind of promotional opportunities might make sense. I don’t know what if anything will come of that conversation, but it is something new to explore.

Five years ago we were able to hitch the video portion of our marketing to rising star Jack Klink. At the time we got great rates because Jack was still building his portfolio with pieces like this:

We do not have Jack’s services this time around. There are some great video ideas on the drawing board, but I don’t know yet what we’ll actually get produced.

So in summary: in spite of the similarities, I feel like I’m marketing a completely different production this time around. In future posts, I’ll be sharing new promotions that I’m trying here and what kind of results I see.

For now, though, I have to go get ready for rehearsal.

Next Story: How Does a Portable Show Find Connections With Theatres?
Previous Story: What’s the Best Way To Get Groups To Purchase Tickets To Your Show?