How much do you need to market a popular show? 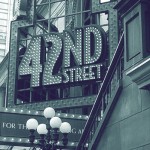 Theatre – even community theatre – is a business. Although you may have directors, actors, and crew volunteering their time, you still need to pay for rent, utilities, printing, script rights, and dozens of other costs of putting on a show. So while you may occasionally try a more avant garde production, most theatres that hope to stay commercially viable need to include some blue chip productions in their season.

So how much do you really need to market? The title is going to be doing all the work for you.

You know the blue chip shows. These are the ones that even the most casual theatre patron recognizes. Our Town. Death of a Salesman. Arsenic and Old Lace – all of which are great shows. They didn’t get to be popular because they suck. But aside from artistic merit, one of the most compelling reasons to include these titles in your lineup is to help your bottom line.

Audiences turn up for shows that they recognize. Who wants to take a chance seeing a new show that might be awful when you can see a show that you know is at least pretty good? (I mean besides us.)

So you selected a popular show because the name of the show itself is going to get people in the door. So how much do you really need to market? The title is going to be doing all the work for you. That’s certainly the best case scenario.

Even the most loyal fans of Arthur Miller can get burned out (sorry, couldn’t resist) on vindictive accusations of witchcraft. Maybe too many other theatres have done it in recent years. Maybe the local high schools have been over saturating your market with the story. Maybe current events, Hollywood films, or any other unexpected influence that you had no way to predict sours the general public on a particular story for a year or two.

If you wait until opening night to see what kind of turn out you get, there isn’t a lot you can do to address poor attendance. But the sooner you can identify that the name Noises Off isn’t going to pack the house for you, the more theatre marketing tactics are available to you.

So how you can tell very early what to expect?

I propose treating your audition turnout as a barometer of how excited your community is about a show. Unless you do something dramatic to announce your auditions, a big turnout there implies a big turnout at the box office. If the show is popular enough that lots of people want to appear in it, that usually means lots of people will want to see it, as well. If your auditions look pretty anemic, you know it’s time to roll up your theatre marketing sleeves.

I haven’t done any kind of scientific research on this, but anecdotally I can say that this sure seems to be true for all the auditions I’ve seen. If you have any examples from your own experience of a big audition list corresponding to a big box office take (or not corresponding at all), I’d love to hear about it in the comments.

Next Story: Beyond auditions and cast lists: what makes for a good theatre blog?
Previous Story: How to get the killer photography that can make or break your run