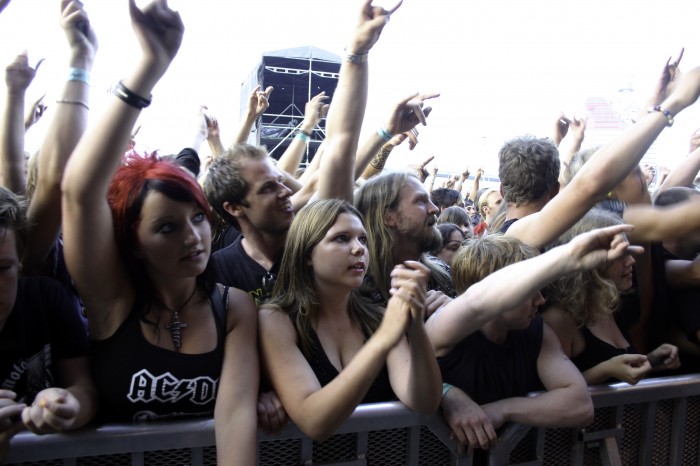 The energy is a little different when your friends and the friends of your cast are in the audience. If you have a small theatre, it only takes a handful of these friends to notice the change. Even in a large theatre, though, 10-15 loyal friends can lift the energy of the entire room. The applause is just a little louder, and it carries on for just a little bit longer.

If you’re extremely popular, maybe you could stack the house with a dozen friends for every single show. But what if you’re not quite that well connected? Is there any way to make your audience fall in love with the people in your show before the it even starts?

We all have favorite celebrities. Maybe you’ll go see anything that George Clooney is in. Does your DVD collection have a special section of Natalie Portman films? For me it’s Diane Lane. (I’m even considering going to see Secretariat.)

So why do I leap at the chance to watch her perform? It’s because I feel like I know her. I’m rooting for her.

Diane and I have never met. She’s never even heard of me, and we certainly aren’t friends. So why do I leap at the chance to watch her perform? It’s because I feel like I know her. I’m rooting for her.

How do they do it?

Although celebrity can occur on accident, far more often it is the result of very specific and intentional actions taken. A celebrity may appear on late night talk shows. They have press junkets to promote new movies. They’ll pose for the cover of magazines that couldn’t have less to do with acting.

It’s all in the pursuit of helping people become familiar with their face and their name. These techniques won’t make you fall in love with somebody that you can’t stand. If you would normally rank an actor as a 7, though, becoming more familiar with them might turn that into a 7.5. (If everyone in your audience goes up half a point on several of your actors – that makes a big difference.)

I’m guessing you would be hard pressed to get the face of your actors on the cover of a magazine at your local supermarket check out line. Fortunately there’s a less expensive approach that actually does a better job of getting you in front of the right people: the ones who have at least a passing interest in your show.

During the rehearsal process, you get to know your cast better and fall in love with them, right? The first read through of the script is a bunch of strangers that are’t sure of each other. By the end of your run, your cast is crying and lamenting that they may never see each other again.

You want images of people in mid-laugh. Get shots of people dancing and running around.

Let your audience in on that experience.

You should be taking pictures throughout the rehearsal process. Not posed shots – or at least not strictly posed shots. Make sure to get some candid photos, too. You want images of people in mid-laugh. Get shots of people dancing and running around. You may be too busy during rehearsals to keep a camera in your hand all times, but have someone taking shots.

These pictures go up on your website. (You can also get very good results putting the pictures up on Facebook.) If you can do short interviews of your cast, that’s great, too.

For weeks before your show starts, people who are poking around your site will be slowly falling in love. By the time the curtain goes up, they will already feel a bit of a connection with the people they see on stage.

After that, it’s all up to your show.

Next Story: 7 reasons a blog is the fastest, easiest and most effective type of website for your show
Previous Story: 5 Reasons You Want Your Own Domain Name