The Open Book Project: Putting Together a Marketing Calendar 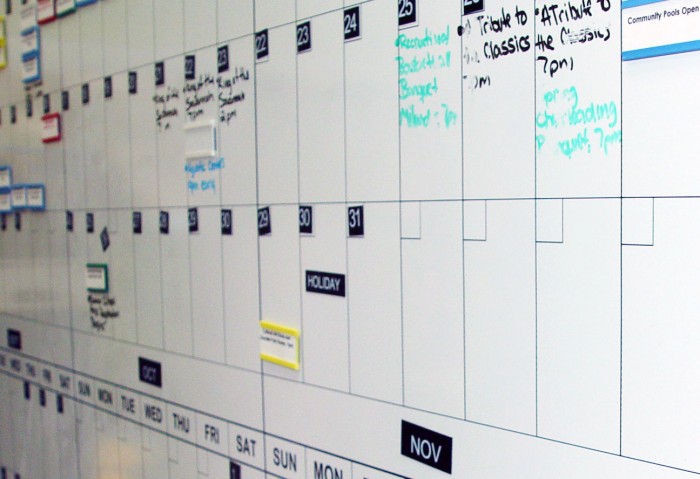 In the previous Open Book post I shared the marketing ideas that we had brainstormed for Edward Albee’s At Home At the Zoo. A few ideas have already been put on the back burner, and one or two new items were added as we transitioned from a disorderly pile of possible tactics into a more defined outline of when these various tactics will come into play. Enter the marketing calendar.

One of the notable ideas from the brainstorming that doesn’t show up on this calendar is the idea of reaching out to support groups for families of people dealing with mental illness. After getting feedback from the director and the producer (who’ve both been studying this play for far longer than I have) it’s not a perfect fit for this script.

The challenge is that while one of the characters, Jerry, may very well have a psychological condition, that condition is not the primary focus of this story. Perhaps even more importantly Jerry’s actions are not necessarily representative of the actions that would be taken by all or even many people with a particular condition.

Much of the drama in the second act comes from the irrational (or at the very least unconventional) behavior of Jerry, but it is about his choices as a slightly eccentric individual. He shouldn’t (and can’t really) be held up as an archetype of a particular condition. So while the tactic of connecting with support groups is a great one, it’s more suited to something like Next to Normal than a show like this.

Scheduling tactics into a marketing calendar

The show opens on 10/25 and runs for three weekends. I started with the opening date and worked backwards. The biggest rush of activity needs to be happening that final week before the first show, but I wanted things to work steadily up to a crescendo at that point.

When you are building your own schedule, you can delete the extra rows in the early weeks of this marketing calendar. I included them here specifically because I wanted to visually convey that there is a lot of time up front when you aren’t publishing as much marketing material. (Pro tip: use that early time to work ahead on some of the items that area happening in those last few weeks when you will be very busy.)

I fully expect this calendar may prompt some questions. For example you might be wondering why I decided to put a certain tactic in a particular week or why other tactics made the cut at all. Feel free to ask those in the comments section of this post, and I will respond.

This calendar includes press releases in the schedule. If you don’t have a good process in place for courting press coverage, start by reading that blog post that I just linked to. Then implement a good rule of thumb for press releases that I picked up from Jessica Kiefer with Bohlsen Group: reach out to your contacts with the local publications 6 weeks, 4 weeks, and 2 weeks before the event. Staying at the top of their mind is critical to success.

Once you know when you want to get certain materials out, you can start working backwards. If we want a video to go up on October 14th, how much earlier do we need to shoot the footage so that our video expert has time to edit things together? Now that we know when we want to be putting things out, we can look at what pieces we need to get lined up to meet that deadline.

And or course I should repeat here again that this calendar can and will change. You’ll get great new ideas that you want to add in. You’ll come up with technical obstacles that stop you from doing something you had planned.

Don’t feel like you need to resist those changes. Sometimes our best artistic insights about the production we’re putting on stage don’t happen until we’re deep in the rehearsal process.  The same is true of your marketing.

Next Story: Great Examples of Low Budget Theatre Trailers
Previous Story: How Do You Know Which Marketing Tactics To Drop?