The Open Book Project: 2 Weeks Out: Video (and Delays) 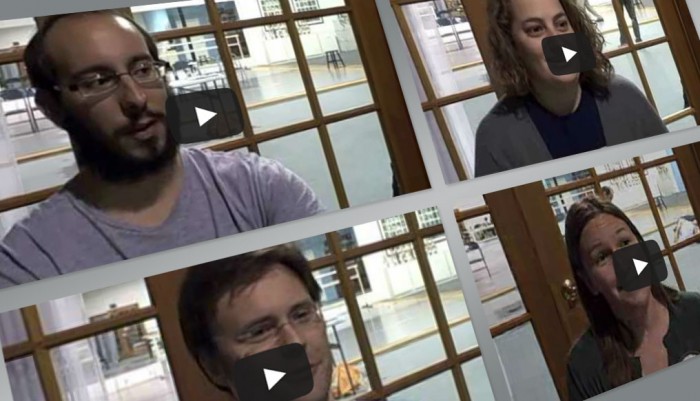 Whew! This is easily the longest post of the Open Book Project so far at over 1700 words. Part of that is because we’re talking about more complex promotions. Another part is that there were more ways that reality didn’t match what we had planned on the marketing calendar this week. Some of the differences are good, and some of them aren’t (at least from purely a marketing perspective). Read on fair reader.

Things got off schedule this week. In some cases that meant an item was released a day late. In other cases we had to push a marketing tactic out of this week entirely. Hopefully they can be caught up in the following week as part of a big blitz leading up to opening night.

I think the finished videos are going to be a very strong marketing piece for this show. They convey that the people involved with this production know what they are doing and are investing in bringing this production to stage.

In several of the shots you can see rehearsal going on through a glass door in the background. I love this. I’m not sure of the exact psychology behind this, but the impression it creates for me is that this is a very natural conversation. It looks like the actor was pulled aside when they weren’t in the scene and asked a few questions. The fact that a camera happened to be rolling seems like a happy accident.

Scot’s discussions of each actor! Far and away the strongest part of these videos in my opinion is Scot talking about his cast. That’s not terribly surprising. He went through the audition process and landed on these three talents for a reason, so it makes sense that he could articulate what he thinks they are bringing to their respective roles.

I also liked the additional video that AUP came up with. The original marketing calendar didn’t have a specific video planned for the thoughts of the creative team. Presumably because they got good responses from the directors, sound designer, and stage manager – AUP decided to use the footage to create an additional video.

This makes a ton of sense to me. Much as I wanted to emphasize the talent of these three actors because they truly are each very talented, we should emphasize the creative team because this just so happens to be a very talented crew. I’m not sure the how much of that talent comes across just in these videos, but the intent is right. In hindsight there should have been more focus in the marketing for highlighting these folks.

AUP added in a question that appears in all of these videos basically asking what you would say to someone who doesn’t go to a lot of live theatre about why they should come to this production. This relates directly to part of AUP’s mission of reaching beyond the circles of regular theatre patrons and introducing new audiences to this particular art form.

I don’t know if this question will have a big impact on the box office for this show because we didn’t go very far with it. It’s really just tucked into these videos without much emphasis. I’m not sure any of the interviews gave a truly compelling answer, but I like the idea of AUP turning this into a question that appears in the marketing material for all of their productions. I hope they do.

What I wish was different

I think this post (and the entire Open Book Project) is going to be most helpful if I elaborate on the lessons learned along the way. So there’s going to be a big section here where I talk about what I would have loved to see different, but it’s important to note that these videos are absolutely a success. No one knows the original vision that was in my head as they watch these, so all they are going to see are some solid videos with knowledgeable people geeking out about the show they are working on. That’s very positive.

Now. The post production was rushed. This isn’t anyone’s fault. The shooting took place later than would have been ideal. As a result, Beth was editing videos on the same day they were scheduled to go out. She did amazing work within the time constraints, but there just wasn’t enough time to give feedback on the rough cuts of the videos and make additional tweaks.

The video for each actor features a lot of that actor talking. My original thought with these videos is that the actors would be talking about each other. So the video for Josh, for example, would feature the rest of the cast and the director talking about Josh. (There are elements of that in the final videos we used.)

The challenge is that in order for that dynamic work, you really need b-roll. So while everyone else is talking about Josh on the audio track, the video track needs to cut to images of Josh reading his script, acting out a scene, and laughing between scenes. That requires a lot more out of your post-production. You need the software, the skill, and the additional video footage to make that happen. Because of constraints with time and budget, those weren’t available.

No one is going to be watching these videos and thinking, “boy, I bet they wish they had some b-roll.” But I think it would have made a more compelling case for the talents of these actors. It’s hard for anyone to talk about how great they are themselves, but it comes much more naturally to most of us to praise the people around us for the things they are doing right.

But again even though they ended up a little different than my original vision, I think these videos were absolutely worth the time and energy that went into them.

What I could have done differently

One of the things I think I could have done differently was to provide more questions to be used the day of the shoot. I had provided a lot of options for questions in the written interview that I shared 5 weeks out. In hindsight the questions I suggested for the videos are a little anemic:

I had imagined the actors all going into great detail about the wonderful things their cast mates were doing during rehearsals, but the questions here are too general to expect them to make that leap. I should have given more specific, separate questions about what each actor was bringing to their character’s physicality, voice, mannerisms, and humor. Specificity in the questions would have led to more detailed answers.

If there was more material with the actors talking about each other, there would have been better raw footage available to create the type of video I originally pictured.

As of the time this post is going up, the director’s notes are still in development. Having talked to Scot about this production before, I know he has spent a lot of time thinking about telling this story, and actually that comes across clearly in the videos. I don’t know how that’s going to translate into his notes, but I’m excited to see them.

Sometime when he has more time, I’m going to ask him if knowing that I wanted to use excerpts of his notes in the marketing was a hindrance. Maybe it’s causing him to over analyze what he wants to say? Maybe it has nothing to do with the delay at all.

I sent Beth two different announcements around opening night that she will revise and use this coming week. One focuses on the talk back that will occur after the show. Mostly the announcement is built around emphasizing that this play covers material that merits talking about. It will make you think, and it may prompt questions that you would love to ask of the team that brought this story to life.

The second announcement addressed a specific experiment that AUP wants to try: Tweet seats. The announcement explains that specific seats in the back row will be available for the social media aficionados who would like to live tweet the show. Much attention is paid in the announcement to conveying that this will not be disruptive to other audience members who prefer to enjoy the show without distracting lights and noises around them.

I expect I’ll link to both of the final versions of both of these announcements when they go out next week.

Ideally your marketing will be attracting new people as you get closer and closer to the show. Some of those people are going to go back and look through all of the promotions you’ve put out so far. Sometimes it’s a good idea to look back at the material you’ve put out into the world just to see if any mistakes have crept in.

At one point last week I wanted to look up the exact showtimes for this production. I was on Facebook at the time, and the quickest way seemed to be to jump to the Facebook event page for this show. That’s when I realized that the showtimes weren’t anywhere in the description of the event. Anyone who wanted to know when they could see this show wouldn’t have any idea from this page. It was a quick fix, but an important one.

I also noticed when I was looking at the media kit that the thumbnail image of one of the actors was a broken. Now it linked to the full version of that portrait, which displayed just fine. Technically this shouldn’t have stopped anyone who was trying to use images of the actors, but it looked sloppy. Another quick fix, but we wouldn’t have noticed it if I hadn’t been browsing through the marketing material.