Ideally the second week of a run is about amplifying whatever social proof you were able to achieve opening weekend. Our formal and informal reviews from opening were mostly positive, but we didn’t have much social proof in the form of large crowds. That meant tweaking our marketing plan to adapt.

As I shared in the last two posts, the attendance for opening weekend was not what I had hoped. I have some theories on how and why that happened, but I’m saving those for the final post at the end of this project. (The tweet in the image at the top of this blog post provides a few hints.) 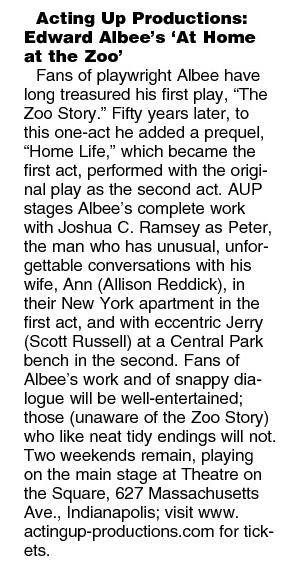 The image attached here is a scan from the Greenfield Daily Reporter. (Until earlier this year, AUP made it’s home in Greenfield, just outside of Indianapolis.) There was also a fairly detailed review posted on the local theatre review blog, Stage Write.

The only review that you could describe as a bad review was a short blurb with 2.5 out of 5 stars that appeared in Nuvo, the local alternative newspaper. As bad reviews go, this one was pretty good.

The 2.5 stars probably hurt us in the eyes of anyone who scans the numeric ratings without reading the actual reviews, but I didn’t really have a problem with the actual content of the blurb. The reviewer didn’t like the realism that was brought to this traditionally absurdist piece. I actually think that’s part of what makes this production stand out from other productions of this story, and I consider it a strength.

I wrote a response to the Nuvo review saying as much, and it appeared on the AUP website. I strongly considered leaving my response directly as a comment on the Nuvo review. Ultimately I decided that my role in marketing the show might make the comment there come across as sour grapes, but I still wonder if I made the right decision. I would have loved to have generated a conversation there on the Nuvo page.

Beth gathered up the chatter about the show that occurred on social media, and put some of the best quotes (along with the 4 videos that were produced to promote the show) in an email. That message went out to the AUP mailing list.

One of the ideas that came up as I was reading through the feedback I got (from asking people why they didn’t want to come to the show) is that some of the people we got in front of were a little intimidated by the show. They weren’t necessarily in the mood for art that made them think and possibly required discussion to process.

The challenge is most book clubs are not designed to take fast, spontaneous action.

Albee’s work here is as rich and subtle as the novels that foster great discussions in those groups. The people who enjoy book clubs would be ideal for this production. The challenge is most book clubs are not designed to take fast, spontaneous action. They often meet once a month, and decide a book weeks (if not months) in advance so that everyone has time to read it on their own schedule. With only two weekends left, it’s a big challenge to mobilize this group in in the time we have available.

Of course it would have been much more successful had I thought to reach out to these groups months earlier, but frankly it just hadn’t occurred to me until I saw 1.) the sparse crowds that were showing up and 2.) the success of the talk back.

At any rate I decided it was worth making the effort to reach out to these types of groups on whatever slim chance we might have of success. I located two likely groups on Meetup in our area, although I think any chance this tactic has for success is with people where we have a personal connection with someone to the book club that we can personally invite to the show.

I ghost-wrote a script for Beth to use when reaching out:

I’m contacting you because of your involvement in {book club or organization name}. Since your group enjoys discussing works that delve into some of the more complex ideas of humanity, I wanted to extend to you an invitation.

Let me back up. My name is Beth, and I’m one of the owners of Acting Up Productions. We had a talk back after last Friday’s performance of our current show, Edward Albee’s At Home At the Zoo, where the director and cast came out after the performance to participate in a discussion with the audience.

We want to do more of that, so we’re extending an invitation to a few groups like yours to see if we can get even more people who like to think about art and discuss it in the room at the same time. There’s a lot of meat to this script – and the story of how the acts were written 50 years apart.

We’ll be holding another talk back after the show on {date(s)}. If you’d like to get a few friends together to come, the theatre is general seating (so you don’t need to purchase your tickets at the same time in order to sit together). Specific information about the theatre, showtimes, and ordering tickets is available at {link}.

If you are interested and able to attend, I look forward to seeing you. Also if I can answer any questions or provide more details about the show, please let me know.

I’m not sure if this can move the needle with this group in such a short time frame, but I feel compelled to try.

I wasn’t able to get any compelling shots of the crowd on opening night. There wasn’t anything I think we could have shared that would’ve conveyed the type of social proof we were looking for, so that tactic was dropped. Unfortunately we also didn’t have any highlights of the talk back. As I shared with Beth after the fact, I think a video of the talk back would have made for some great marketing material to use this week. I think if people were able to see how the audience was connected and engaged after the show, it would have felt more inviting.

Social media was hit hard to try and drum up a crowd for the Sunday matinee. The price was dropped to $10 for the show. I have mixed feelings about that, but I certainly understand the impetus AUP felt to try something new. The risk you run in adding a discount after the show has opened is sending the message that no one is coming to the show. Just as social proof can help your ticket sales, the absence of social proof can hurt them.

This ended up being the smallest turnout of any of the shows yet. No way to know if the price drop hurt attendance or if it was the only reason the few people that showed up came.