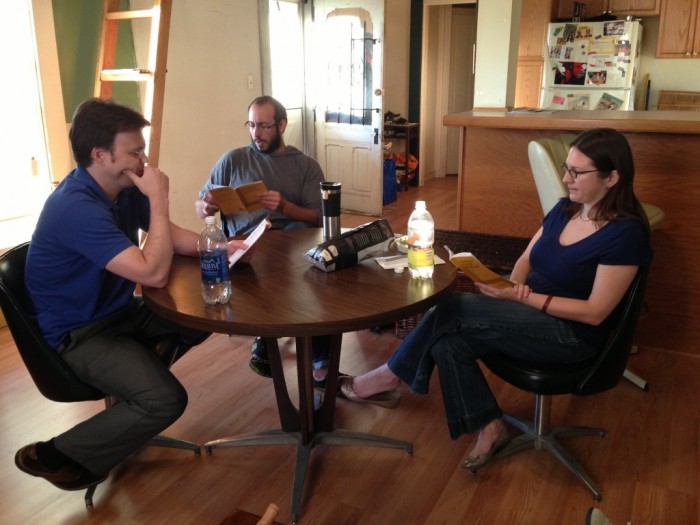 In thinking about what kind of theme I would use to describe the marketing activity this week, I kept coming back to the idea that we’re telling the story of how this production is going to present the solid work of very talented people.

The playwright wasn’t phoning this one in. He came back to a work that was already successful on it’s own and dove back in to that world because he knew he could make it richer. The thoughtfully cast actors are hard at work drawing the characters out of the page.

Story of the Script

As I was learning more about this play, I thought one of the most interesting aspects of its origin is how the script came together. What is now the second act of Edward Albee’s At Home At the Zoo was originally just a one act play called The Zoo Story.

The piece was very successful. Conventional wisdom would suggest leaving it alone in that case (especially since Albee demonstrated his ability with other successful pieces over the years) but the playwright felt compelled to revisit this work.

50 years after creating The Zoo Story he wrote another act to serve as a prequel. What creative need forced him to revisit this world he had created half a century ago? What did he still need to say? I think that’s one of the most interesting questions about the combined piece and provides some great fodder for theatre aficionados who may already be familiar with The Zoo Story to explore as they watch the dramatic foils Albee has added with the new act, Homelife.

From a marketing perspective, this is a great story that captures what is going to be very new about this production – particularly since this is the Indianapolis premiere of the new combined work. I wrote a short piece about it for AUP to post on their blog and on social media.

In the case of this show, a picture like this (which is featured above in this post) takes on extra significance. One of the things we’re highlighting in our promotion of this show is the talent of the three actors that make up the cast. We show them here at work with scripts in hand. This is a very early step in building a trust with the public that these actors are investing themselves in this production. We want it to be blindingly obvious to the public that their commitment and craftsmanship is going to be present on stage.

This week Beth over at AUP – who is doing a fantastic job of coordinating all the moving parts of promoting this show – sent an email out to our director about his Director’s Notes for the show. Those are going to be important in the marketing next month, probably sooner than most directors would normally prepare their notes for a production.

Like anyone directing a show and juggling the other demands of life, Scot is a busy guy. That’s why Beth is giving him a lot of lead time since we’re requesting something a little out of the ordinary.