Anytime you start getting some traction with marketing online, there’s a chance you will attract the attention of some enterprising hacker who wants to hijack your audience and your web traffic. Showing that Murphy’s Law is in full effect, that happened to the AUP website the Wednesday before the show opened. The website was hacked and all of the content for the site was deleted.

The content was all restored, but for a day none of the marketing material that we had been working so hard to put out there was available. It’s hard to imagine it happening at a worse time. In spite of that negative, almost all of the material we had planned made it out this week.

I’m not sure how much of an effect the pull quotes had. I think the images work fine, but I’m not sure the actual quotes are that compelling. For all that Edward Albee’s words are engaging in the context of the play, I’m not sure how compelling any of the lines from this production are in a vacuum. Click to view each full image, and you can decide for yourself. 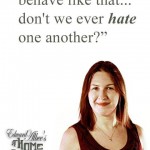 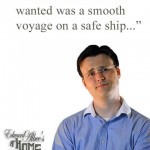 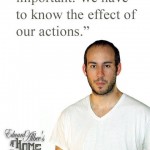 Since hindsight is 20/20 I also wonder if the images would have been more compelling if they had been on a different background. Part of the advantage of an illustrated pull quote is that it jumps off the page. The white background might have made it blend in a little more with all the other text on Facebook in particular.

Held over from last week, I pulled an excerpt from the director’s notes to include as another marketing touch point. I thought Scot wrote a very fitting prelude to the evening of dramatic theatre. Here’s the quote I used:

We homo sapiens created the concept of the zoo. We give other animals faux habitats in which to live. We put them in cages, with bars or windows that separate them from us — and them from one another. But to what degree do we, as individuals, do that to ourselves? What cage have you unwittingly built around you? Sure, maybe it feels more secure. But it’s still a cage. Isn’t it?

The trivia questions got a little attention on Facebook, but not a ton. The point of the trivia isn’t necessarily that a hundred people enter to win a ticket. That’s great if it happens, but the real function is to serve as another interesting reminder that the show is happening.

It’s still great when lots of people enter because their connections on Facebook can see their activity. That raises awareness of the show and provides social proof of friends demonstrably interested in seeing this production.

I’ve embedded the posts below for you to see exactly what they look like and what sort of activity they generated. If you’re reading this from the RSS feed, you can see the trivia posts here and here.

I wrote two announcements about opening night for AUP to use. The first was that there would be a talk back immediately following the performance. In the talk back announcement, the emphasis was that this production was complex enough that the audience would have questions and thoughts about what they had just seen. This was another opportunity to emphasize the cerebral nature of the show.

There was also a second announcement pertaining to Tweet seats. The back row was reserved for patrons who wanted to live Tweet the show. In addition to inviting people to participate, the announcement also needed to reassure other audience members that they would not be disturbed by the folks on their phones.

Indy Style is a local TV segment here in Indianapolis. On Thursday they aired a piece where they covered five upcoming arts events over the weekend. There was a ton of stuff going on in Indy this weekend, so being included in this list is actually pretty cool.

The selections were made by their theatre/dance/music contributor, Tom Alvarez. Tom is one of the press contacts that AUP reached out to with the press release and media kit. Based on how Tom describes the show in this short clip, I feel pretty confident that he read and remembered the information AUP sent out to him.

In the follow up to this post I’ll cover the crowd that showed up this past weekend and what’s next on the marketing docket.

Leave a reply to Matt McKee