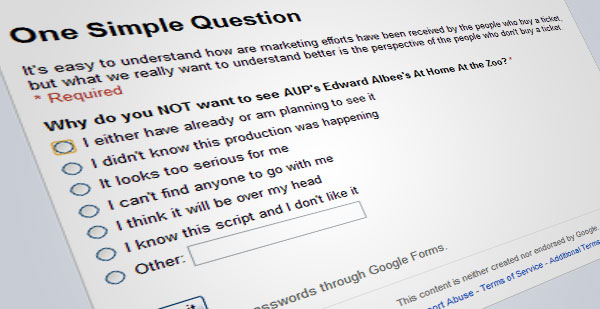 When you open the house for the first time you get to really see what your marketing has done. Advance sales give you some critical early indications, but until you have a reputation for repeatedly selling out, most people wait to buy their tickets until they get to the theatre. The cast and crew is anxious to find out if people like the show. I’m anxious to find out if they like the promotions, which they demonstrate by showing up. In the previous blog post, I covered the marketing tactics used the week leading up to opening, but now let’s look at what happened when the curtain went up.

I attended the show opening night, and I enjoyed it. You can always promote a show you don’t personally enjoy (after all you might not be the intended audience), but I find the process is just a hair more pleasant when you do enjoy the product up on stage.

Standing in the lobby 20 minutes before curtain, I started getting nervous. There was a tiny trickle of people that had come in to the theatre, but not enough to put me at ease. 5 minutes before curtain I felt a pit in my stomach. This was a substantially smaller crowd than I had been hoping for.

With some reluctance I walked over to the ticket table where the business director, Beth, was standing. I asked her how she felt. I’m sure she would have liked to have seen more people, but she didn’t seem as distressed about it as I did.

Apparently this wasn’t a bad crowd compared to many of their previous opening Fridays. She said that the first Saturday is where they usually see the bigger audience. I still wasn’t thrilled with the numbers. Maybe she was just putting a positive spin on things, but I felt better that she wasn’t alarmed at least.

I consider this experiment a success. I sat two rows in front of the two live tweeters we had during this performance. At no point did I notice any noises or visual distraction. It created some inertia for the #AUPZoo hashtag. I saw even more tweets using that hashtag later in the weekend.

One of the things I was most concerned about with what I felt to be a low attendance on Friday night was the talk back. I expect only a small percentage of the audience to stick around for any talk back, and I was worried we were only going to have one or two people there which could be awkward for everyone. Instead the majority of the crowd stuck around, and the discussion was informal – but thoughtful. 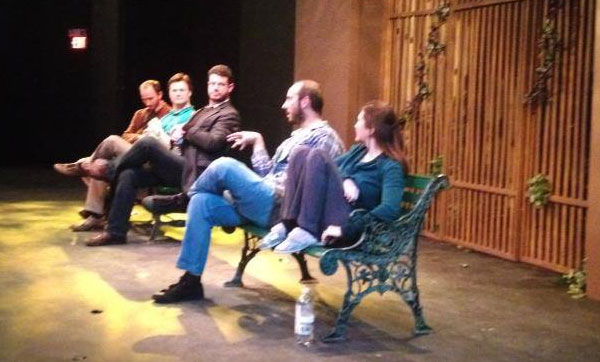 during the Friday night talk back after the show

I didn’t attend the show Saturday night but I sent Beth an email while I was still in bed Sunday morning asking about the numbers. I was crestfallen a few minutes later when I saw her reply that the crowd for Saturday was not even half the size of the Friday audience.

There’s a grieving process that happens when you don’t get the numbers that you expected (and frankly that I think this show deserves). Over the course of several hours on Sunday I went through all the stages. I wondered if there had been a typo or a miscount. I got angry, doubtful, and depressed. After I went through that process, though, I got curious.

I felt very confident that we had gotten the word out about this show. I also felt like the marketing message of talented people doing a weighty dramatic production was conveyed, but maybe not? The only way to find out was to ask.

I wanted to know what was going through the minds of the people who saw the marketing material but didn’t feel compelled to buy a ticket. Using Google forms I created a survey with exactly one multiple choice question. I just asked why people didn’t want to see the show.

I shared it on a couple of Facebook groups that center around theatre activity in Indianapolis. Our marketing material had appeared in these groups repeatedly over the last few weeks, so I felt pretty sure I was going to be reaching people that had seen what we were putting out there. Hopefully I could get some clues about why it wasn’t connecting.

Here’s exactly how I invited people to follow the link to the survey:

I have a 30 second favor to ask, Indy theatre friends. I’m helping promote the current AUP production which opened this weekend, and I’m blogging about the experience. It’s easy to ask people who come to the show why they decided to come. What’s tough is asking the people who decide not to come: why?

What I’ve got here is a single multiple-choice question that is completely anonymous. It would help me *enormously* if you take a second to click this link and pick which option describes why this production doesn’t really appeal to you. I can’t tell you how much I would love to have your honest opinion. Neither AUP nor myself will know how you responded.

The form has some multiple choice options, but I was very pleased that over half the respondents used the “other” option and wrote in their own responses. It made it slightly more difficult to analyze the results, but the trade off is I felt like I was getting honest responses.

Too busy or too broke

Over a third of the respondents answered either that they were too busy right now to see the show or that they didn’t have the money to afford tickets. These were all responses that people wrote in under “other.” I knew people would respond with these answers because they’re the most common, but we have to set these aside because we can’t really draw any conclusions from this group.

We all have a limited pool of time and money, and we choose to spend that on things that are a priority to us. We know that seeing this show is not a priority for this group of people, but we don’t know why.

About 7% of the respondents said that the show just looked boring. This is a group that we could potentially connect with if the marketing material was a little different. Truthfully I feel okay with this number. If 50% of the people you have seen your marketing material tell you it looks boring, that’s a problem. Your marketing message can’t (and shouldn’t) appeal to everyone, so a number in the single digits doesn’t cause me alarm.

Some of the respondents who said they were too busy or too broke probably meant this. In that case this response gets my attention. It’s worth noting that this has nothing to do with whether or not the show itself is boring. Remember none of these people have seen the show. What this really means is that the marketing material itself looks boring. It just isn’t connecting with them.

There’s probably nothing that can be done at this point to reach this group – certainly not in the two weeks left in this run. This is a useful data point for future AUP productions, though. It’s worth looking at the words, graphics, and videos created for promotions with this production with a critical eye. What could be done to make them more interesting the next time a similar tactic is used.

Would people have responded better if the posters had been black and white? What if the videos had a higher production value? What if we emphasized the comedy aspects of the script instead of the dramatic?

Didn’t know about it

I was surprised that so many people gave this response – particularly since the invitations to this survey were sent out over Facebook, where I felt we had been putting out daily updates about the show for the last few weeks. The best I can figure, there are some people who mostly just use Facebook on the weekend. The promotions have gone out during the week, while the survey request went up on the weekend.

Hmm. Maybe Facebook usage patterns have changed over the last year or two. It might be time to revisit how I schedule the marketing calendar to try to hit the weekend users.

Have or plan on seeing

I’m guessing many people who plan on seeing the show didn’t even click through to the form because the invitation was worded in such a way as to imply (correctly) that it was really for the people who don’t want to see the show. Some probably clicked through out of curiosity, though, and then saw an option that fit them.

A few people said they are familiar with this script, and they don’t like it. They are probably referring to the script for the second act, which has existed in theatre curriculum for decades. If was I collecting this survey information one-on-one I would ask a follow-up question to find out if they knew about the new first act. Many people who don’t like At the Zoo probably wouldn’t like Homelife either, but I’d want to know if we were successful in conveying the additional piece to people that were predisposed to tune out at the words “Albee” and “Zoo.”

The run isn’t over yet. It’s entirely possible that the next two weekends will draw larger crowds. The box office for the opening weekend has fallen short of my expectations, though.

I’m not satisfied with simply continuing with what’s on the marketing calendar for the next two weeks, though. I’ll be talking with AUP this week about what we can do quickly to bring in a bigger crowd for the rest of this run.