7 Ways To Promote Your Theatre Show Like a Rockstar (Literally) 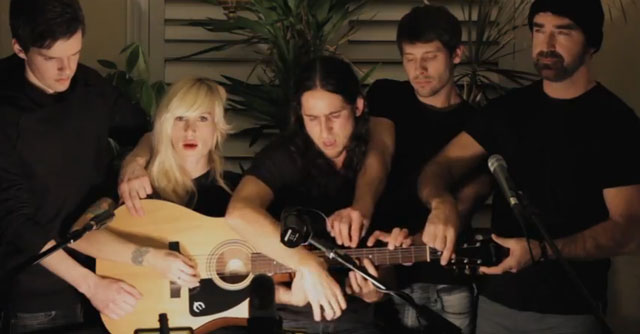 All of your promotions should be at least as intriguing as the production you are marketing. They may be less expensive, less formal, and will almost certainly take less time to create. Nevertheless they should be works of art unto themselves. Successfully blur the lines between your performance and your promotion, and you will connect with people so entertained that they can’t wait to buy a ticket just to find out what you do on stage.

Last year I stumbled upon an Internet video that grabbed my attention and wouldn’t let go. As soon as the video ended, I immediately watched it again. It was a cover by a rock band. Clearly it did not cost much to create as they had just set a camera on a tripod and hit record, but I was captivated because they were original and dedicated.

The band is called Walk Off the Earth. I’ve never heard them on the radio, but they have over 1.1 million subscribers to their YouTube channel. That’s not just casual views of a video – that’s people who went out of their way to say they wanted to be notified when this group uploaded anything new. Why? I think it’s because this group treats their videos (which are promotions for their albums and concerts) as works of art. We can all learn from their example.

1.) Do something familiar in a new way

This is the first Walk Off the Earth video that I saw. The Gotye song they’re covering here has received a lot of exposure in the past year. Even though I’m a little tired of hearing the original, I stopped and watched this video twice as I was writing this post. I’m still captivated by the sheer ambition of having 5 people play a single guitar. This video actually earned them a gig on the Ellen DeGeneres Show where they performed it live exactly as you see here.

Whatever kind of promotions you are doing, it’s important to get to the good stuff quickly. You don’t hide your biggest selling points in fine print at the bottom of a poster. You write it in big, bold letters where everyone can see. If you are doing a video with a clever shtick (like having multiple versions of the performers moving at different speeds)  you need to reveal the shtick quickly. Of course you need to keep exploring the idea and playing with it in new ways to keep people interested, but you have to grab their attention right away so viewers don’t dismiss your promotion.

Everyone knows that it’s very easy to hit record, talk into your phone for 90 seconds, and upload the result to the Internet. It’s certainly better than doing no marketing at all, but it creates a completely different level of interest when people can see that you clearly invested time preparing your promotion. It indicates that you believe enough in this production, that you want to make sure people see it. After all, people assume the quality of your promotion reflects the quality of your production.

There is no one single formula for creating a promotion that works best for all possible productions. But whether you are doing something formal or informal, in person or online, literal or creative make sure that it is something your team feels good about. A good promotion makes it clear that everyone involved in this project is delighted. Otherwise it looks like you are ashamed of this production. Even the best artists have works they are proud of and works that they would rather sweep under the rug. I know which one I want to buy a ticket for.

You can piggy back on whatever is going on in the societal zeitgeist. It could be politics, local events, or even things as simple and non-offensive as holidays. When you touch on topics that are at the top of people’s minds, it becomes easier for them to notice, remember, and talk about you.

I wasn’t sure which video to choose for the idea of cross-promotion because Walk Off the Earth has done it repeatedly. I ultimately picked this one because it’s a catchy song with an amusing tag at the end of the video. When another artistic group encourages their audience to come see your work, that’s nice. When you create a compelling promotion together that highlights the strengths of both groups, you’re each giving a new audience a chance to see what you’re all about.

Much more ambitious than most of their videos, this one is still filmed in a single take, but it clearly required a much greater level of planning and post-production than other Walk Off the Earth videos. I don’t know if they intended it as such, but I view this video as being less a promotional piece and more of the type of art that these guys really want to spend their time creating. What I love about it is that it feels like it comes from the same people that created all of these more informal videos.

They still draw me in with a series of visual treats. They still have me trying to figure out how they pulled this off while I’m watching. They still leave me eagerly wanting to know what they are going to do next.

I picked some of my favorites here, but there are over 60 videos on the Walk Off the Earth YouTube channel. Not all of them are performance videos like these, but most of them are. I encourage you to skip around their featured videos and find some inspiration for your own promotions – video or otherwise.

Next Story: The Difference Between Marketing and Promotions
Previous Story: Reader Question: How to create content for social media without beating the same drum about ticket sales