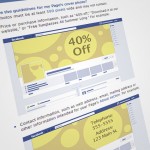 Last week I sent a message out to my email list with a tactical tip for using social media (Facebook specifically) to promote your show with your cast. I got some positive feedback on that email, and I received a particularly important response from subscriber Corina Mackay – who knows a thing or two about social media. Here’s her message:

This is a really good tip! I just wanted to check that you know about Facebook’s strict rules about promotional cover photos? I think personal pages are exempt, but for a show fan page or a theatre company’s page, there are pretty heavy restrictions on what you’re allowed to add to a cover image (no calls to action, no promotion or pricing details, etc).

Just wanted to check in case you didn’t know about that!

I had heard of these restrictions before, but I hadn’t given them much thought when I was sharing examples of great Facebook cover images with my email list. Here are the very general highlights of Facebook’s policy on cover images:

You can check out the full explanation of the restrictions (which is pretty short), but it seems like if you want to live safely within the rules that Facebook has laid out you should avoid using text in your cover images as much as possible. That’s pretty restrictive, but it’s the clearest way to make sure you aren’t committing any violations.

What does this mean for a show?

So how does this break down when you are creating a cover image for your show. I don’t work for or have access to anyone at Facebook, but here’s my take.

Does this really matter?

Having just shared my take on how these rules apply to shows, I now pose the question how much does this really matter? There were over half a billion active users on Facebook in June 2012. There’s a lot of activity to monitor, and realistically Facebook just can’t police everything for strict adherence to there rules. In all likelihood, your event page isn’t going to see enough traffic for an extended enough period of time to draw the attention of the Facebook gods.

Of course that may not be true tomorrow. Now being a publicly traded company, Facebook could decide to pour resources into monitoring every page regardless of size. They could develop a new bit of code that makes it simple to review every single cover image for adherence to these rules. I don’t think something like that is likely, but you should realize that it is possible.

Ultimately Facebook is the one with all the power here. They can take their ball and go home whenever they want, but they also need you to use their platform to promote your show and engage with as many people as you can. That’s how their business runs.

Thanks to Corina for taking the time to point out Facebook’s written policy on cover images.