Sharing a Few of My Mistakes 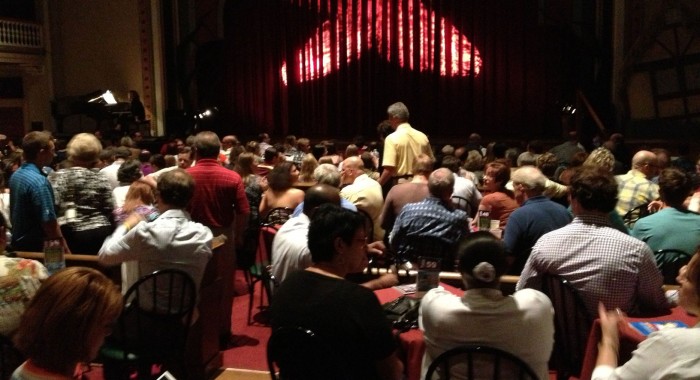 This isn’t a post I’m eager to share because I don’t like admitting my mistakes. I certainly make them, but I normally try to move past them and focus on the positive things I’ve accomplished. Well, marketing always includes a few ideas that don’t pan out as well as you hoped. You learn from what didn’t work and move forward.

And I say that the purpose of Sold Out Run is to share what I’m learning about theatre marketing. It’s time to put my money where my mouth is and share some of the lessons I’ve recently learned about things not to do. These aren’t tiny minutiae that went wrong – I encounter those on every project I work on. I’m sharing here a cautionary tale of a few systemic flaws in how I approached a recent project.

The picture here is from the final weekend of a production here in Indianapolis. The show was SPAMALOT produced by BobDirex. As implied by this image, the final weekend was completely sold out. I was very pleased to see that because there are some kind and talented people that put this show together.

I actually was involved in a very small way with the marketing, but unfortunately this crowd is not the result of my contributions to the promotion of the show. I believe that the marketing work I did for SPAMALOT had very little (possibly even zero) effect at the box office.

So What Did I Do Wrong?

Earlier this year a friend suggested that I talk to Bob Harbin who was putting on a production of SPAMALOT. We met and got along very well. Many of the marketing pieces that I would normally implement for a show like cast bios and a social media calendar seemed to already be covered, but I really wanted to work with Bob.

1.) Not realizing when I wasn’t needed

This was the first problem. I wanted to work with Bob, so I convinced him to let me be involved even though I didn’t have a really clear pictures of what I was going to be bringing to the party. Most of the time, this wouldn’t get me into too much trouble. Most productions have a lot of holes in their promotional plans, and I can step in and pick up the slack. But the areas of strategy and online promotion – which are real strengths for me – were already being addressed. I had not dug deep enough to understand what marketing was already being done before shoehorning myself in.

If I had learned more about what was planned before committing to the show, I would have realized that I was setting myself up to be redundant. All was not lost at this point, though. This just meant that I was going to need to push myself to come up with new ways to promote the show.

2.) Not integrating with the rest of the team

There are exactly two initiatives that I took on with promoting this show. Neither one produced much in the way of ticket sales, but that has more to do with how I implemented them than with the merit of the ideas themselves. (More on the implementation below.) Both of those ideas came about when I was in a conversation with Zach Rosing.

The little bit of time I was talking to someone else involved with the show netted two great ideas, but I did not spend enough time on that sort of thing. The fault for that is entirely my own. Especially since I was going to be looking for new ways to promote the show that I didn’t have previous experience with, brainstorming with the other smart people who were emotionally invested in the financial success of this production should have been my top priority. I needed to be moving mountains if necessary to make that happen, and I didn’t. I was operating in my own silo.

This lone wolf routine that I accidentally set myself up in did not help with promotion. Both of the groups I was reaching out to provided potential PR angles for the show. If I had been sharing more of what I was working on with the rest of the team, we could have sent a pitch to the local paper with statistics on expats living in the city and what kind of economic impact they have. That’s a little bit more work, but it’s the sort of pitch that gets picked up for a feature.

It’s a moot point, though, because I wasn’t integrating with the rest of the marketing networks. I was trying to reach out to the expat community on my own. I made a little progress, but not enough. What if the overture had appeared in all the social media channels for the show? What if that idea was mentioned during interviews about the show?

Promoting your promotions is a great way to get marketing content.

The funny thing is that might not have gained any more traction with the expat audience, but it’s the sort of thing that’s interesting to the general public. Even if you’ve never set foot in the UK, it’s still interesting to hear about a show doing something so specific and intentional. Promoting your promotions is a great way to get marketing content.

But I was trying to reach out to two groups with whom I didn’t have a pre-existing relationship. I was just trying to get the attention of someone in the group.

4.) Not identifying the influencers

Trying to engage an audience that you’re not already a part of isn’t necessarily a bad thing. As long as you have respect and affection for that audience (and it’s a good fit for your show) it can be a great connection. But I didn’t follow my own advice that I write about in Reaching a New Audience. I didn’t try to identify the thought leaders in either of these two audiences.

I tracked down the Facebook group for the local chapter of the SCA, and they invited me to join. They did this because I was nice and was reaching out to the group respectfully, but I wasn’t reaching out to an individual. I just got invited to the group. And what did I do then? I posted a discount offer on Facebook. *facepalm*

Again I was very polite and friendly, and I was presenting a genuinely valuable offer. I don’t think anyone was offended, but I also don’t think anyone was particularly inspired to buy a ticket. How much different would it have been if I had dug deeper and discovered a very strong personality in this group? Imagine that instead of blasting a general message to everyone, I had some more personal interactions with just one or two people. If I had gotten those individuals excited about attending the show in garb, they would have invited everyone else in the group to come with them.

Instead of a stranger to their group dropping in to try to sell them a ticket, they would have had a friend asking if they wanted to come do a cool thing this weekend. Mistake #4 is particularly humbling because I know better.

…as I mentioned above the show had a very successful run. The final weekend was sold out. That’s a great testimony to the talent of the people involved both on stage and behind the scenes. Congratulations on a great production, Bob!