I would never suggest casting someone in a show based on how active they are on Facebook. Without question you go with the performers that will put the best product on stage. Your reputation is at stake.

What I am suggesting, though, is taking advantage of two facts.

With over half-a-billion accounts on Facebook, it’s likely that some of your people are active on the hugely popular social network. In the shows I’ve been involved with there are often a few people who are extremely active on Facebook

When you visit Facebook, you’re greeted by a stream of the latest activity of your friends. What does that look like? Well it includes status updates, links to web pages that someone thought was cool, photos and videos they’ve uploaded, and even comments they’ve left on other people’s Facebook pages. Naturally whenever you add a status update to your personal Facebook page, it’s seen by everyone who is your friend on Facebook (regardless of the nature of your relationship off Facebook).

If they comment on your status update, photo, video, or whatever that’s even better. Their comment will show up to all their friends – even people you’ve never met.

The secret to getting a big bang for your buck with Facebook is to tag.

In addition to the personal page that everyone on Facebook has, you can also create fan pages. These are pages that you would use for a business, a charity, or an organization. (Hint: they’re also perfect for shows.) Instead of creating and keeping track of a ton of different logins and passwords, you can create multiple pages and have access to them all from your regular Facebook account. If that isn’t incentive enough, Facebook kindly provides insights on how many people visit your fan page and how they’re interacting with it.

Just in case I was being too subtle above, you should definitely create a Facebook fan page for your show. It’s actually very easy to create and will be home base for all your activity on Facebook.

When you upload a few photos from rehearsal to the site. Those will be seen by anyone who has told Facebook they are a fan of your show, but that might not be very many people at first. A few people in the cast and your mother does not an impressive fan base make. Building a following through social media can take months or years if you aren’t aggressive about it, which is very likely longer than the entire run of your show. 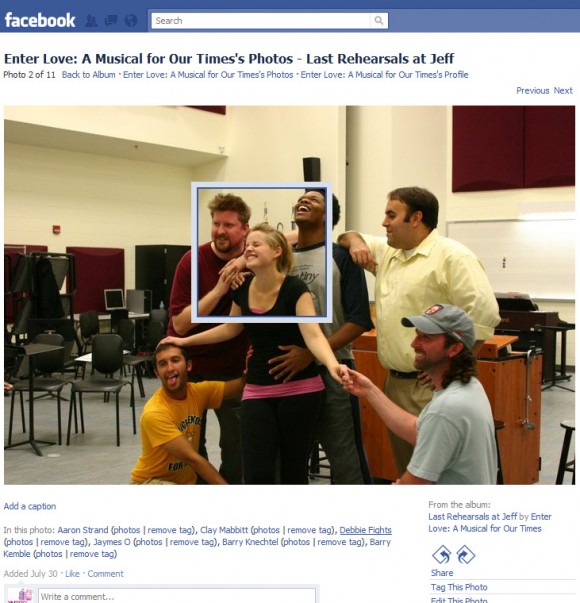 The secret to getting a big bang for your buck with Facebook is to tag. This is the process of telling Facebook who is in a picture. Why would you bother with that? Say you upload a photo from rehearsal – group scenes work best. When you attach your star’s name to the photo, it will be visible not just to fans of your show – but to all of your star’s friends. Those people might include their old friends from high school, current friends, family, coworkers, and probably a few social networking junkies that try to increase their number of Facebook friends like it was a video game score. (We all know at least one.)

At the time of this writing the average Facebook user has 130 friends and some have many, many more. We aren’t talking about random strangers, though, that your shouting at from the radio, TV, or newspaper. These people are particularly likely to be interested in buying a ticket since they personally know someone in the show.

How many people are involved in your show? Start doing a little number crunching, and you quickly see how a little time spent on Facebook can be very good for your box office.

Next Story: 4 Elements of Bios That Get People Excited To See Your Show
Previous Story: The Best (and Worst) Way To Get Photos and Videos During Rehearsal