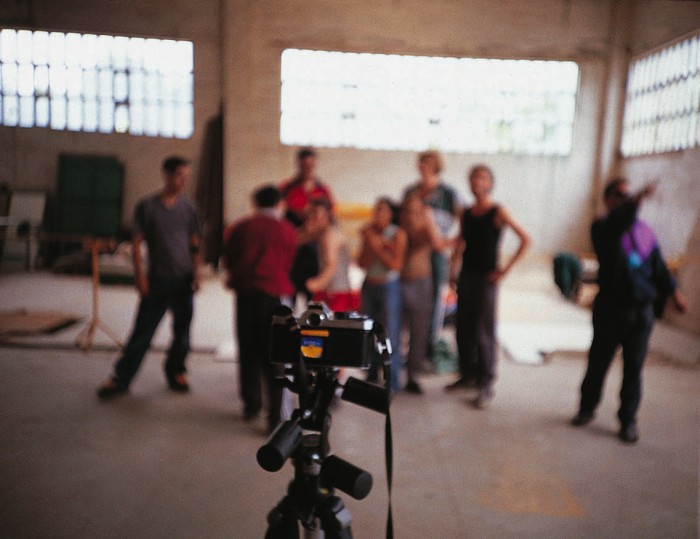 All of your promotion efforts are going to be more successful if you have some high quality media. Especially when they are looking at a computer monitor people’s eyes tend to glaze over when they see large chunks of uninterrupted text. Some catchy photos or videos they can watch, though – that gets noticed. They’re also more likely to get passed along, and going viral like that is the holy grail of promoting your show online.

What sort of images do you need to be capturing? Ideally you are grabbing spontaneous moments from rehearsals. You can start giving the public fleeting, teasing glimpses of what the final product is going to look like.

The worst option: you

So who’s holding the camera? For a split second you may be tempted to grab the footage yourself. After all:

Ever bring a book and just tune out for 10-15 minutes while everyone else is working?

Think about it, though. How often during a rehearsal are you twiddling your thumbs? Ever bring a book and just tune out for 10-15 minutes while everyone else is working? If the answer is no (and I hope it is) you aren’t going to have a chance to take the shots. Every other hour of the day you may be able to devote yourself to promoting the show, but during rehearsals you simply have to be working on the product you’re putting up on stage.

It doesn’t do any good to fill the seats for a show that is under-rehearsed, under-produced, or under-directed. Just accept that during rehearsal you are too busy.

Slightly better options: other people in the show

If not you, then who? I’ve been in a few rehearsals where there was a “community” camera being passed around. The idea is when you aren’t on stage you can be taking pictures. The result? Not much to speak of. Everyone was running lines or thinking about entrances and exits. Maybe if you have an amateur photographer in your cast this could work, but it’s never worked for the productions I’ve been part of.

The best option: an outsider

If there’s any way to swing it you’ll get the best results by having someone come in who’s only job with the show is to take photos and video. Especially with video. You can skate by with having someone else grab photos when they have a second, and you’ll probably luck into some decent shots. If you have any expectation of getting good video, though, you’re going to have to get someone that’s holding a camera in their hands pretty much the whole time. Seem financially daunting? It is possible to get a good videographer on a budget.

Next Story: Tag Photos and Videos In Facebook To Get Your Show In Front of Thousands of People
Previous Story: 8 Keys To Giving Away Free Theatre Tickets and Increasing Your Box Office Take