Why Giving Away a Ticket Is Better Than an Empty Seat 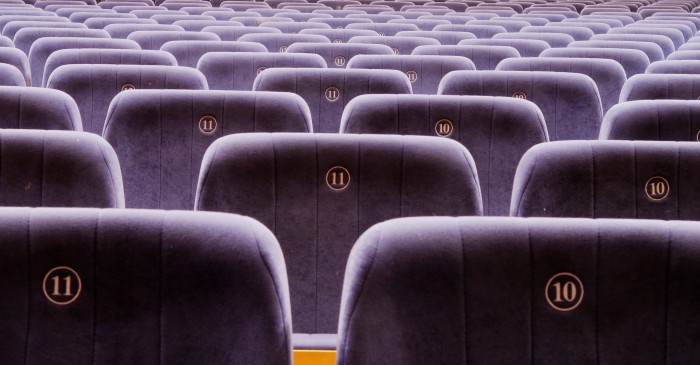 Not everyone is in agreement on this idea, and I admit there are compelling arguments on both sides. When you weigh all the factors, though, I feel like intelligently comping a ticket has a better net effect on the financial (and even artistic) success of your show than leaving a seat vacant. So here I outline why I fall on this side of the fence. I also touch on some of the disadvantages of papering the house and my response to each. 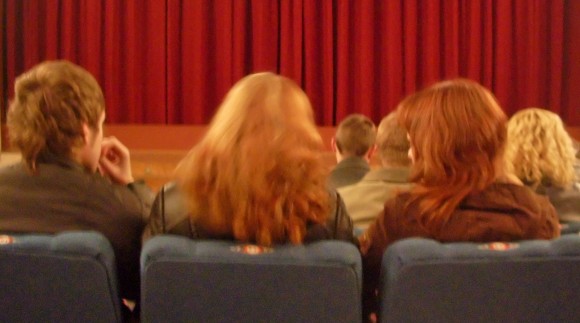 I will get to the financial benefits of comping tickets, but first I want to touch on the artistic advantages. Live theatre is an experience. We’re using stagecraft to immerse each individual audience member in the world we’re creating.

Part of that experience is being surrounded by other people on the journey. Ever notice how a large audience laughs at a funny moment in a show? It’s completely different from how people laugh as individuals.

Being in a large crowd actually changes how they experience the performance.

Within the safety of a crowd, people let themselves go. Instead of worrying if they are laughing too loud or if they are going to miss an important bit of dialogue, someone in the middle of a guffawing audience can’t help but be taken along. They ride the wave of laughter and the physical act of laughing changes their mood. Being in a large crowd actually changes how they experience the performance, and assuming the crowd isn’t full of hooligans that change is for the better. 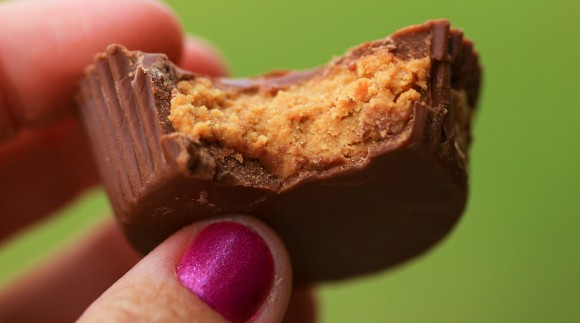 Now let’s get to a more tangible, measurable benefit to giving away tickets. And thanks for sticking with me. 🙂

When someone comes to your show, no matter if or how much they paid for a ticket, they bring their stomach with them. Simple math tells us that the more people you have in the audience, the more you are going to sell in concessions during intermission and before the show.

You may wonder if the people who got in to the show for free are going to buy anything. After all they were too cheap to buy a ticket, right? Not exactly. Unless you stand outside the theatre an hour before the show shouting that anyone can come see the show for free (awful idea, by the way) your audience members who didn’t pay full price aren’t necessarily there because they are adverse to spending money.

Ever see someone walk by eating a cookie and decide you wanted one, too?

In fact you may find that these special guests are actually more likely to pry open their wallets for some snacks. Since they didn’t pay for admission, they can indulge their sweet tooth and still end the evening feeling like they got more than they paid for.

If that wasn’t benefit enough, just the presence of these additional customers may result in more of your full-ticket-price-paying audience members stepping up for cookies and candy. How does that work, you ask? Ever see someone walk by eating a cookie and decide you wanted one, too? 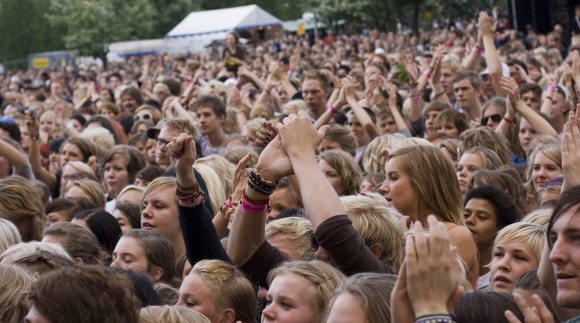 We all like to feel like we made a good decision. When the house lights come up at intermission and after the show, what do people do? They stand up and look around the room. If their vision is filled with a sea of smiling or teary-eyed faces (depending on your show), that confirms that a lot of other people wanted to see this show, too.

Maybe you’re thinking that what people really want is to believe they found something unique and exclusive. They actually love it when they feel like they have found a theatre gem no one else knows about, and for a small percentage of the population that’s true. Here’s the problem: if you build your marketing strategy around these people you will at best leave money on the table and at worst go out of business.

The average person is reluctant to see a show unless they know it’s going to be good before they go. Why do you think reviews are so widely read?

There’s also an argument that a bunch of people who didn’t pay for a ticket isn’t really social proof that the show is worth spending money on. I guess you could argue that the paying customers don’t have any idea how many of their fellow audience members didn’t spend a dime to get in, but that misses the point.

You aren’t just paying money when you go to see a show. You are spending two hours of your life, time that you could spend doing something else. Think of the worst production you’ve ever seen.

Got it in your head?

Now would you go see that same production again even if it was free? That people are willing to pay for a show with their attention is social proof. 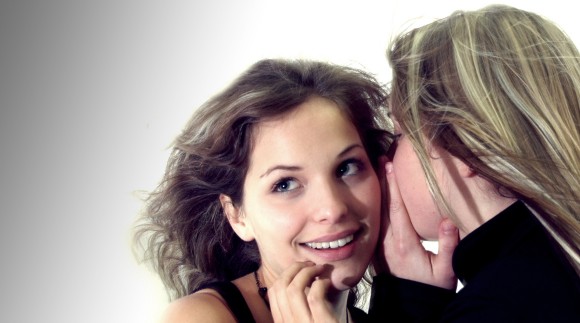 When people get into the office on Monday, it’s pretty common to ease into the work week by talking with their coworkers about how they spent their weekend. The more people who are physically in your audience, the more people who will be chatting around the water cooler about your show.

Will they mention that they saw the show for free? Maybe. But the citizens of cubicle nation are still going to be asking if the show was any good. If you’ve done your job on the stage, every free ticket you gave away becomes a voice saying, “You should definitely see this show.”

And how much better if there is a sense of urgency to those words. Imagine your new advocate also says, “You should get tickets ahead of time. There weren’t any empty seats.”

You should get tickets ahead of time. There weren’t any empty seats.

These words could come from the people that saw your show for free and your paying patrons. In either case the only way they are going to urge their friends to buy tickets ahead of time is if all the seats in the production they attended were occupied.

IMPORTANT POINT: Free tickets as a means to fill your audience is a stepping stone. The goal is to raise the profile of your show enough that you have sell out shows later in your run. Selling a ticket is the goal. Giving a ticket away is a very, very distant second. But an empty seat does you even less good. 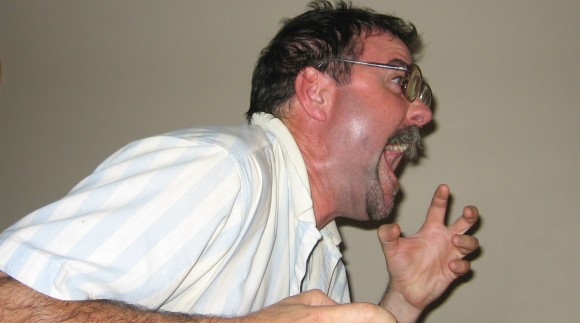 Papering the house is not without its drawbacks. There are some valid arguments against the practice, and I address a few here.

This is pretty easy to understand. The guy sitting right next to you is enjoying the exact same theatre experience – only it isn’t costing him a dime. Why should you have to pay?

The truth is when someone gets into a show for free, they realize that other people around them paid. I have no data on this, but my experience is that most people are fairly discrete about this sort of thing. Yes, there probably are some fools who roam the lobby trying to impress folks with how important they are, having received complimentary tickets, but I believe such individuals are the minority.

I don’t think this is a very big issue, but if you are concerned look for ways that you can give your paying patrons a little something extra. If you don’t have general seating, give the best seats to your paying customers. Maybe they get a coupon for concessions. Just make sure it doesn’t feel to them (or you) that you’re apologizing for having wronged them in some way. As I mentioned above, having more people in the crowd improves their theatre experience.

2.) Could be bad for morale

Your cast and crew have been hard at work putting together the best production they possibly can. Some of them might get discouraged that there are so few people who want to see the show that you have to give tickets away to get people in the door.

You know what else is discouraging? An empty house! Even people who are seeing the show for free are still deciding to spend their valuable time watching the show. We’re talking about people getting a free ticket, but it’s not as if they are being paid to watch the show. Anyone in the crowd is there because they want to be there. If your cast and crew don’t immediately understand that, take it upon yourself to make sure they get the picture before the curtain goes up.

3.) Giving away tickets that might have been sold at the door

This is the sort of thing that can drive accountants and financial backers nuts. Theatre is a business and they are trying to make a profit. You give away a bunch of tickets and completely fill the house. Then a group of people show up at the box office with cash in hand, and you have to turn them away because there aren’t any seats left.

While it may seem frustrating at first, this is a good outcome. Yes you lost a few dollars, but you now know exactly what to say tomorrow morning on the website, to your email list, on Facebook, over Twitter, at the coffee shop, to your online events calendar, to the local arts editor, and on the phone with your friends and family:

YOU HAD TO TURN PEOPLE AWAY AT THE DOOR!

Now when you tell people to buy tickets in advance, that statement has some teeth. At this point dial back a little on the free tickets because they’ve accomplished what they were intended to.

This is a good thing.

How do you do it? 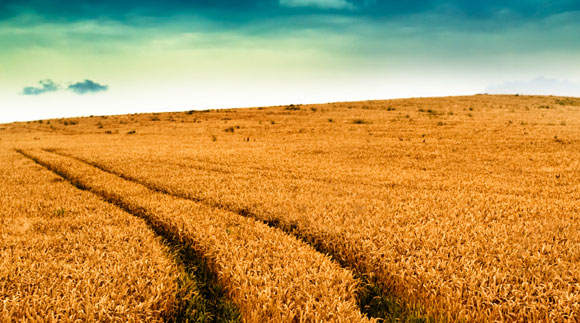 So how do you go about giving away tickets? Some approaches are better than others, but there is no single right approach that’s best for every show in every community.

I do recommend trying to find influencers, and by that I mean people whose opinion carries some weight. Certainly the local press and arts bloggers fall in this category, but you can think broader. Why not invite the theatre professors of the local university? Depending on the suitability of your show, maybe you can even invite high school drama teachers. These folks are likely to recommend the show to their students if you are doing something noteworthy.

So how do you fill the seats of your shows if ticket sales are lagging? What works in your area? Or are you vehemently opposed to the practice? Let me know in the comments.

Next Story: How To Use YouTube In Theatre Marketing
Previous Story: How Early Do I Need To Start Promoting My Show?